Fueled by a trend of re-urbanization and low overall inventory, the developers of the Salvador condominiums in downtown St. Petersburg have sold out all units in the 13-story project.

The 74-unit building, developed by Tampa-based DDA Development from a MESH Architecture design, was completed in April.

Roughly one third of the units were committed to prior to commencement, and 95% were sold before construction completed, says David Moyer, director of sales at Smith & Associates Real Estate, the Tampa-area firm that was Salvador’s exclusive leasing firm.

Moyer notes that The Salvador’s units sold for an average of $400 per square foot, with upper-floor units commanding significantly higher prices.

He says the project, close to both the Dali Museum and the University of South Florida St. Petersburg, was a magnet for empty-nester baby boomers interested in moving to a vibrant urban setting.

Moyer notes, as well, that with the Salvador’s milestone, The Kolter Group’s 41-story One St. Petersburg remains the only new condo project available in the city’s downtown.

One St. Petersburg, a $300 million project that will contain 253 upscale condo units, is slated to be completed next year.

“There’s a limited amount of land available for projects of the Salvador or One St. Petersburg style, which are downtown and close to the city’s waterfront,” says Moyer.

One St. Petersburg’s units are roughly 80% sold out to date, he notes. 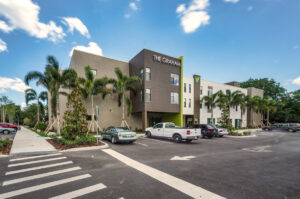 DDA completes Graham at Gracepoint and has ribbon cutting ceremony