ST. PETERSBURG — Cranes and construction crews seem to be showing up on every other block within a half-mile of the waterfront, but downtown’s residential development boom shows no signs of slowing down.

Developers on Thursday announced the latest upscale residential tower, a 13-story, 74-unit condominium named after the famous surrealist painter whose museum is a block down the street.

The Salvador is planned for the corner of Second Street South and Dalí Boulevard, across the street from the University of Florida St. Petersburg, with many of the condo homes looking over The Dalí Museum to Tampa Bay.

DDA Development will clear out a few existing rental homes and offices on the lot to make way for the new tower, provided presales go as planned, said David Moyer, director of developer service sales for Smith & Associates, a real estate firm that’s marketing The Salvador.

Groundbreaking could be in the works for February.

The tower will offer a range of price points for one- and two-bedroom units, starting around $315,000 for a 960-square-foot, one- bedroom unit up to $1.5 million for top-story penthouses with 2,500-square-feet and sweeping views.

Situated on the south end of downtown in an area city leaders have dubbed the “innovation district,” with a concentration of marine science labs, educational institutions and the massive All Children’s Hospital/Bayfront Health medical complex, Moyer expects the condo homes to sell quickly.

“When you actually get into the home a year and a half from now, the values will even be higher than what you bought it for,” Moyer said.

“We’re not promoting the investors per say, but a very attractive sell to it is you’re really getting in on the ground floor of an area that’s really turning.”

The downtown district as a whole appears to be turning rapidly, with developers eager to build and sell units to people looking to move into downtown’s bustling core.

The Salvador enters a market with more than 1,300 rental apartment and condo units in various stages of planning and construction and more than 500 apartment units built within the past two years.

The condo homes are aimed primarily at buyers who don’t want to pay top dollar to live on Beach Drive, but want to be close to downtown’s shops, restaurants and waterfront parks, Moyer said.

The units will face north and south, and those above the fifth floor will have water views of The Pier and the bay.

All will come with stainless steel appliances, European style cabinets, quartz countertops and other upscale trimmings, and each is designed to be highly energy efficient.

The Salvador will be built for maximum energy efficiency and the developers say it will be one of the few green certified residential towers in the Tampa Bay area.

In the past month, another developer unveiled plans for a 41-story luxury condo with a 13-story hotel a few blocks north of The Salvador along Central Avenue.

The spike in development comes as no surprise to the city’s Economic Development Director Dave Goodwin, who says it’s simply a response to the rising popularity of St. Petersburg’s walkable city center and the mass of entertainment and culture that’s grown up here in recent years.

Whether he sees another flurry of residential projects come across his desk in the coming months will depend a lot on how quickly the completed apartments are rented and the condos sold.

“I wouldn’t say we anticipate it, but we wouldn’t be surprised. It really depends on how quickly the current units get absorbed,” he said.

“At some point, if the absorption is not there, they may slow down a little bit.” 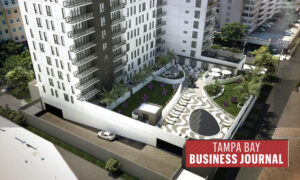